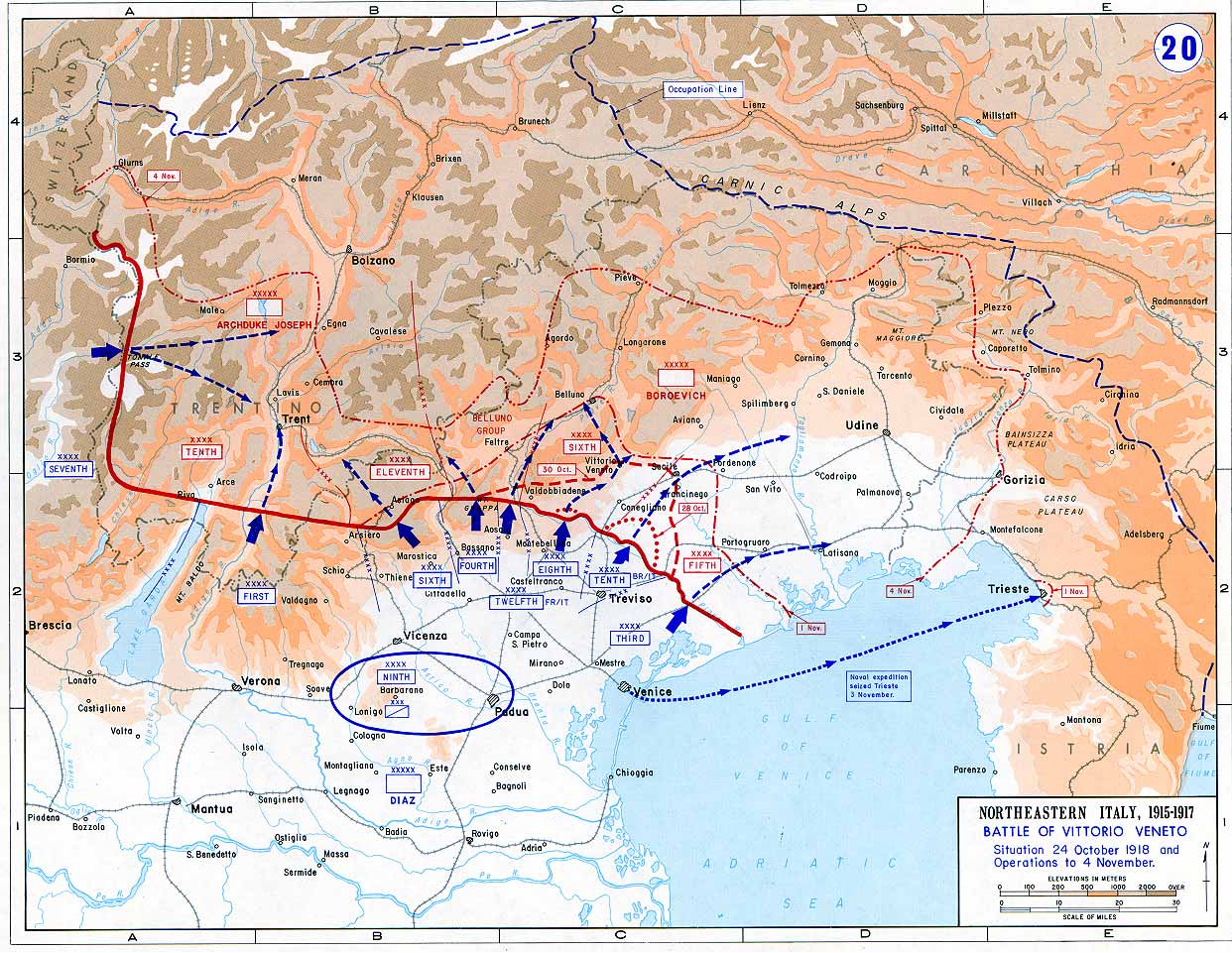 Just a hundred years ago during World War I, today’s charming Venetian holiday town was occupied by the troops of the Austro-Hungarian Empire

VITTORIO VENETO BEFORE THE OCCUPATION OF 1917

Founded in 1866 from the union of the two ancient towns of Ceneda and Serravalle, at the beginning of the twentieth century Vittorio was already a thriving town with a remarkable architectural heritage, due to a long and independent history of the two old towns and the more recent development of the post-unification town which, in 1923, was named Vittorio Veneto.
Serravalle (place name: “valley-closing”) has highly characteristic and elegant villas and that hark back tothe era of rule under Venice’s Serenissima Republic. It is built along the narrow streets of the old centre, while many villas extend the town southwards. Ceneda, to the south-west, vaunts imposing Venetian palazzi and other buildings of equal merit, for it was the bishop’s see and attracted noble families and religious orders over the centuries. The new town centre of Vittorio has instead developed north-south along Concordia avenue, along which the residences of the new entrepreneurial class are found. New buildings for the public administration were built along the same north-south axis.
It was in those houses, palazzi, hotels, public buildings and ecclesiastical properties that the occupying army established its offices and logistic units.

THE INVASION
The German army entered Vittorio on Thursday 8 November 1917, at 11 am. The vanguard was made up of units of the Austro-Hungarian Edelweiss division and units of the German Jaeger Division belonging to Group Krauss. The troops come from San Giacomo di Veglia and reached Piazza Meschio in Ceneda accompanied by planes with black crosses under the wings flying at very low altitude over the town.
Also the officers of the general staff arrived on the same afternoon as Vittorio had been chosen by the invading army as the headquarters for the XIV Austro-German Army, which was then replaced in 1918 by the Austro-Hungarian Sixth Army.
The town became their HQ for a year in what was a very sensitive area, sandwiched between the group of mountain army divisions of General Conrad and the Isonzo Army of General Boroevic.
The Austrian soldiers arrived tired and hungry and were immediately barracked in abandoned houses. The forces plundered and lit fires. Before the war, the town numbered about 22,000 inhabitants. Later, following the announcement of General Cadorna after the battle of Caporetto it emptied to be populated only by women, children, the elderly, the sick and the clergy and nuns. The town resonated with sounds of several languages, the sounds of horses and the roars of trucks and aircraft.
The perception of Vittorio’s inhabitants one of no longer being masters in their own houses, and the belief they had been abandoned, became all the more painful the following day: on Friday 9 November from Vittorio the echos could be heard of the explosions that blew up the bridges over the River Piave, which divided Italy in two. 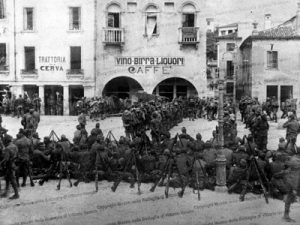 THE CHOICE OF THE TOWN - THE MILITARY HEADQUARTERS

For the eyes of the invaders the town of Vittorio has requirements that make it suitable to the establishment of the army commands.
Placed at a sufficient distance from the front line, Vittorio is located close to those lines of communication which, though inadequate to the needs of the moment, connect the mother country (Austria, Germany, Hungary) to the crucial area of the  war front, between the Monte Grappa and the Montello.

buildings in the city

In the town of Vittorio there are health facilities, production activities, hydroelectric plants, and a large number of elegant and comfortable buildings that allow an immediate settlement for all military commands and logistics needs which an occupying army must immediately activate. Palazzo Grünwald, today Villa Coletti, housed the headquarters of the Secret Police and the Command of Artillery. Palazzo Lucheschi-Czarnocki – was requisitioned as the base of an important military office of the Austrian Hungarian Army. The Town Hall, in Piazza Vittorio Emanuele II, after it lost his duties, was requisitioned as the base of the Court and the Military Command of the Presidium, the famous Orstkommandantur, which replaced the Italian civilian administration. Villa Costantini, near the Friars, was used by the Engineer Corp of the Sixth Army. Palazzo Minucci-De Carlo was requisitioned and used as accommodation for army officers. A fundamental Command in the military organization took over Villa Matilde - Franceschini - Manfredi - De Blasiis, allowing the army to carry out their functions. Still one of the finest mansions in the city, this villa was headquarters of the Austrians and the Hungarian Archduke Joseph, commander of the Sixth Army, who stayed there from January to August of 1918. Because of its important role in the organization of the Austro-Hungarian Empire, the villa became a target of the Italian artillery. On January 1, 1918 a bomb exploded in the Italian villa park, signs of which can still be seen on the south side. Villa Costantini – Moretti – Papadopoli was the headquarters of the German high command, which exercised all power in the military and administrative district of Vittorio until January 1918. 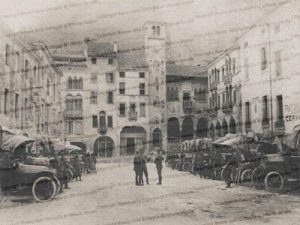 It is not easy nor uniquely identify all the spaces that the German and Austro-Hungarian army chose for their own needs. Were involved in a large number of buildings. During the first weeks  the commands have frequently changed their base, and they have created an understandable confusion.
The population perceives the great extent of this "invasion": From San Giacomo di Veglia to the villages on the slopes of Visentin and Pizzoc the town is fully occupied. 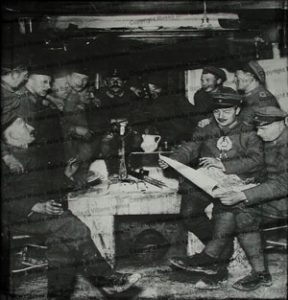 Within a few months, the citizen of Vittorio saw first the German troops and soon after Austro-Hungarian ones, which included Italians from Trieste and Trento, Istrians, Dalmatians, Bohemians, Czechs and Slovaks. Military prisoners - Italian, Russian, Romanian, French, English and Greek - were added to these. The most prestigious buildings were requisitioned and used for services and accommodation for the officers and soldiers. Even the local families who could not leave Vittorio were forced to put up the soldiers of the enemy armies.
A progressive depletion of food stocks exacerbated the difficulties of this cohabitation. Local families had to sustain requisitions of food, animals, clothes, linen and metals. 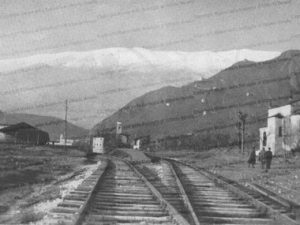 THE NEW INFRASTRUCTURES BUILT BY THE AUSTRIAN ARMY

As it arrived after Caporetto in the areas of Vittorio, the imperial army was forced to use and restore the infrastructures, including those damaged by the Italian retreat. These works were needed to continue the war, maintain contacts with the homeland, and to organize the life of the soldiers.
After restoring the bridges and railway line from Vienna to Conegliano through Tarvisio and Udine, it became necessary to build a new railway to securely connect Sacile with Vittorio.
The new railway was quickly built and already in operation in February 1918. It was single-track branch line, which left the main Venice-Udine line in Sacile Cornadella and crossed to Vittorio in the locality of Sant'Andrea di Bigonzo, after passing through Caneva - Cordignano - Cappella Maggiore - Anzano and Costa.
In the area of ​​Vittorio, the Austrian army built other infrastructures such as the Vittorio-Revine cable way and the narrow-gauge railway between Soller, Pieve di Soligo and Vidor. And the road of Passo San Boldo was built in just over 100 days. The aim was, again, to ensure a regular flow of supplies to the immediate rear of the first line.
Another important infrastructure was built in the spring of 1918 in San Giacomo di Veglia: an airfield to accommodate up to 40 fighter bombers. Already at that time all the armies had high hopes for military aviation. 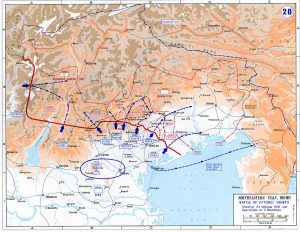 THE LIBERATION OF VITTORIO

The German and Austro-Hungarian divisions had entered Vittorio Veneto on 8 November, 1917 following the Italian defeat at Caporetto (today Kobarid, Slovenia). On 30 October 1918, those same invasion forces were driven back out of the town after the Italian victory of the battles on the line of the Piave River. The situation of the Austro-Hungarian troops was disastrous and the will to fight was definitively broken; a series of Italian air strikes also added to the disorder and demoralization among the corps.
During the night between 29 and 30 October 1918, the 6th Austrian Army continued its disorganised and arduous retreat, after giving up the fight against the Italian bridgehead on the river Piave. The II Corps crossed in disorder to Vittorio Veneto and the town was ransacked in the night by the retreating columns. In the morning, the Austro-Hungarians retreated towards Polcenigo to seek shelter behind the river Livenza. After the liberation of Vittorio Veneto, the 8th Army continued the advance until the evening, pressing upon the enemy, chasing the Austro-Hungarian troops over the Serravalle bottleneck, towards Revine, Tovena and Follina.
The armistice was signed in Villa Giusti (near Padua) on 3 November, and on 4 November the Italian General Diaz proclaimed his triumphant bulletin of victory.
The remnants of what was one of the world's most powerful armies are climbing back in hopelessness and chaos up the valleys from which they had descended with boastful confidence.

The texts of this web page concerning the occupation of the city during the First World War are derived from the booklet published by the Museum of the Battle of Vittorio Veneto, edited by Silvia Bevilacqua and Maria Cavasin - Sintesi&Cultura